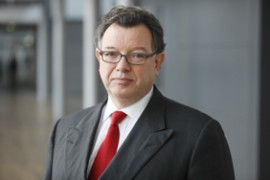 Francioni will step down next May

Carsten Kengeter has been named as the successor to Reto Francioni, who is stepping down as chief executive of Deutsche Börse after nearly 10 years. Kengeter will take over after the exchange group’s Annual General Meeting on 13 May 2015.

Kengeter has been a Visiting Professor in the Department of Finance at the London School of Economics and in the Financial Markets Group and the Systemic Risk Centre since leaving UBS in mid-2013, where he had been chairman and chief executive from 2010-12.

He joined UBS in 2008 with responsibility for fixed income, currencies and commodities

Previously he was a managing director and partner at Goldman Sachs, working in various roles in pensions, currencies and commodities for 12 years. From 2005 to 2008 he co-headed the Asian trading business of the bank.

The current deputy chief executive, Andreas Preuss, will extend his contract until the end of May 2018.

“I am delighted to lead Deutsche Börse into its next phase of expansion,” said Kengeter in a statement. “I am convinced that we will be able to manage the enormous and, to a certain extent, fundamental changes in capital markets and exchange organisations. We will continue to successfully and globally develop Deutsche Börse.”