A city that commands attention 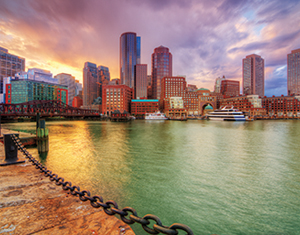 As Sibos returns to Boston for the third time, seasoned visitors might want to look beyond the touristy shops of the Faneuil Hall area and the many Irish bars to delve deeper into the culture of the region and the surrounding area.

History is the thing in Boston – much of the city is actually older than the United States, predating the conflict with Great Britain that led to the Declaration of Independence.

The surrounding area is full of sites commemorating this – about 20 miles outside Boston is Concord, where it all started and there are various tours available of the town and nearby Lexington. Tour Lexington has a range of trolley bus rides to the various points of interest, including the Minute Man National Park as well as the various taverns that seem to have acted as headquarters for the armies of both sides – the rebels at the Buckman Tavern and the Brits at the Monroe Tavern. No drinks at either these days. For that you need to head to the Colonial Inn – www.concordscolonialinn.com – which features the pretty fancy Merchant’s Row restaurant and the Liberty gastropub.

If you don’t like the history you can join the literary trail: the Colonial Inn was once home to Henry David Thoreau and nearby there is Walden Pond where Thoreau wrote the imaginatively titled On Walden Pond. Orchard House, where Louisa May Alcott wrote Little Women, is nearby and other local literati included Ralph Waldo Emerson and Nathaniel Hawthorne.

Closer to the heart of Boston, though across the river, is Charlestown, home to the USS Constitution. Worth a visit in its own right, the Constitution is the oldest warship still in commission. It was nicknamed ‘Old Ironsides’ during the War of 1812 when it defeated HMS Geurriere and HMS Java in two actions that effectively ended the Royal Navy’s dominance of sea power.

More history can be found along The Freedom Trail, a 2.5 mile walk that takes in 16 nationally significant historic sites including museums, churches, meeting houses, burying grounds, parks and other points of interest, with plaques telling the story of the American Revolution.

The trail is well marked with red bricks inlaid in the pavement the length of the route, which starts at Boston Common, heading up through Faneuil Hall through the North End Area and across to Charlestown, where the Constitution is moored.

A downloadable mp3 audio guide to the tour is available, along with maps and other information, at www.thefreedomtrail.org. If you can grab only a short time, check out the Old State House Museum (next to the State Street stop on the Orange or Blue T lines). John Adams said it was “where independence was born” – the first reading of the Declaration of Independence was delivered from the balcony, an event marked 200 years later by a visit from the British monarch, Queen Elizabeth II, who greeted crowds from the balcony as part of the US bicentennial celebrations in 1976.

It is just two floors, but has plenty of interesting items – actual tea from the Boston Tea Party, for one thing. It’s $10 to get in.

Across the Charles River to the north of Boston is Cambridge, home to Harvard and the Massachusetts Institute of Technology (MIT). Like most university towns, Cambridge has a distinct atmosphere and plenty of activities, including bars, cafés clubs and other place to hang about in. MIT offers guided tours of the campus, conducted by students. This includes the Infinite Corridor, a 147 smoot-long* corridor that links the main buildings of the campus. Other attractions include the MIT Chapel, a creation of the Finnish-born architect Eero Saarinen, who was also responsible for several other iconic buildings, including the TWA building at JFK and the Gateway Arch in St Louis. (He is also credited with swaying the selection of Jorn Utzon’s design for the Sydney Opera House.)  Details and booking here.

A cycle ride around the Cambridge area and along the river is highly recommended: the 950 acre Charles River nature park has dedicated cycle and jogging routes, as well as canoeing centres and other outdoor activities.

Halfway between Boston proper and Cambridge, astride a bridge over the river, is the Museum of Science. The entrance fee is $23 for an adult and a rather steep $20 for children up to the age of 11.

One current attraction is the Laser Floyd: Dark Side of the Moon “a mind-bending landscape of light and sound set to Pink Floyd’s 1973 masterpiece”. Fortunately for ageing Floyd fans, it’s only $21 to get in for over-60s and $9 for the 40 minute show.

Clam chowder is a must have, although it is a bit of a cliché and many versions are poor – like fish and chips in London or hot dogs in New York. Website Serious Eats reckons one of the best places to go is Turner Fisheries: 10 Huntington Avenue, 617 424 7425.

Seafood in general is a must, in fact,  and raw bars abound: these are generally of excellent quality. Gourmet.com lists eight favourites, including Jasper White’s Summer Shack, at 50 Dalton Street, which claims to be the biggest. (617 867 9955)  Also recommended is the Union Oyster House at 41 Union Street (617 227 2750).

At the top end of the fine-dining spectrum, Boston doesn’t rank in the Michelin guide, but many reckon it is only a matter of time for Menton, headed by Barbara Lynch, one of the country’s top chefs. It isn’t too far from the convention centre, at 354 Congress Street, (617 737 0099)

Alden & Harlow in Harvard Square, Cambridge (617 864 2100), was nominated as one of the 50 best new restaurants in the US by Bon Appétit magazine. Try the beef heart tartare, or the ‘secret’ burgers, they reckon.

Also on the list was Row 34, a “workingman’s oyster bar” at 383 Congress Street (617 553 5900). As well as a raw bar where you can get more than a dozen assorted types of oyster (and, somewhat oddly for a raw bar, assorted smoked fish and seafood along with ceviche dishes of marinated snapper and bass) the menu features lobster rolls, crab cakes and, of course, clam chowder.

Bars abound, as you’d expect in a city with a deep Irish heritage (though they shut much earlier than you’d expect, so the Puritan influence hasn’t completely gone. Hotel bars close at midnight and many others follow suit.)

The biggest danger facing any drinker in Boston is finding he or she has accidentally stumbled into one of the Cheers bars, modelled on the TV programme. The “original” used to be the Bull and Finch, which was where the exterior shots for the show were done. A replica of the bar from the show has been built at Faneuil Hall.

If you happen to find yourself outside the original Cheers, all is not lost, because you are not far from The Sevens Ale House at 77 Charles Street in the Beacon Hill area, which is recommended.

Drink at 348 Congress Street won the title of World’s Best Cocktail Bar in 2013. It’s owned by the people behind Menton, but the food is less rarefied – though that has to be a relative term for a menu that features ‘line-caught swordfish pastrami with pickled Brussels, artichoke and caraway’.

Unlike most US cities, Boston is relatively easy to walk around and well worth doing so from a recreational perspective. In terms of getting to and from the conference centre, you are really best advised to take the coaches that leave from the official hotels. You don’t have to be staying in one, so consult the list on Sibos.com/hotels to find the nearest.

Public transport is good, with the Massachusetts Bay Transportation Authority (MBTA) offering CharlieCards and Charlie Tickets, both of which are stored-value tickets. The card version is charged at the standard fare and the paper one has a surcharge.

Sibos-goers will be interested in the mobile MBTA mTicket, which can be used on all commuter rail lines and ferries – but not the buses or subway, which makes it pretty useless for getting to the convention centre. It can be downloaded from Apple’s App Store and Google Play for Android.

The Sibos venue, the Boston Convention and Exhibition Centre (BCEC), is a five to ten minute taxi ride from Logan Airport. Via the MBTA, you should take the MBTA Silver Line SL1 route to World Trade Centre Station.

There is an MBTA commuter boat dock at the World Trade Centre, not too far from the BCEC, if the Sibos coaches start to get you down. Ferries also go to Logan Airport, with a shuttle bus on to the terminals.

The Citymapper navigational app, available on IOS and Android, is outstandingly good – even more so because it is free. Boston is just one of the cities it covers and it gives bus and metro/rail information, or can use Hailo. You can even use it walking, though in the US you’d be advised to keep an eye on data roaming charges.

The service allows you to sync between devices by registering at www.citymapper.com, where you can also vote for the next city they add – currently London, New York, Paris, Madrid, Washington, Chicago San Francisco, Berlin and Barcelona are available. Why not vote to have Singapore, Geneva, Toronto and Sydney added for future Sibos events?

* 1 smoot = 5ft 7in or 1.7m. It is the height of Oliver Smoot, an MIT alumni who used his body to measure the length of the Charles Bridge. The Infinite Corridor is 250m long. It is also aligned so on certain days the sun sets so that it shines down the whole length, garnering the alternative nickname of MIThenge.