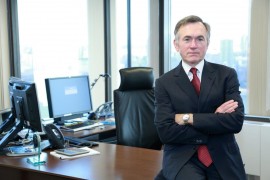 The global financial economy has undergone severe shocks over recent years, from which it has not yet fully recovered. Stable economic growth and the preservation of market confidence must be the priority for central bankers and market participants around the world.

The organisation I am proud to lead, CLS, is a key part of providing that stability to the world’s largest and most liquid market, foreign exchange, writes David Puth.

CLS is one of the critical components of the global financial infrastructure. It significantly mitigates settlement risk between parties to foreign exchange transactions and ensures that trillions of dollars reach their intended destinations around the globe every day with certainty and security.

It has set the standard for international communication and cooperation and is one of only a handful of entities designated by the Financial Stability Oversight Council (part of the U.S. Department of the Treasury) as systemically important to the stability and security of the global financial system.

On 19 June 2014, the US Supreme Court sided unanimously with CLS in a landmark ruling, which had major ramifications for the global economy.

They also agreed that stating that the abstract idea would be implemented on a computer is not enough to bring about that transformation. The other party, Alice Corporation, had its attempt to patent the abstract idea of financial intermediation rejected.

Financial intermediation is critical to the safe and effective operation of all global markets, and we are proud to have led the fight against a very real risk to the global economy.

Had the decision gone the other way, the implications for the stability of financial markets could have been profound and far-reaching.

Sustaining Alice’s patent claims could, as the district court explained, “effectively pre-empt the use of an electronic intermediary to guarantee exchanges across an incredible swath of the economic sector”, not just in foreign exchange.

If sustained, the patents could have been asserted against every bank, clearing house, insurance company, mutual fund and stock exchange that performs financial intermediation.

Also, a judgement permitting abstract idea patents more broadly may have opened the door to further claims to the very building blocks of the financial markets.

Throughout this case we sought to highlight that the claims against CLS directly threatened an entity that is vital to the functioning of the largest and most liquid market in the world, foreign exchange.

CLS is now more important than ever to this market. The financial crisis of 2008 proved a defining moment for CLS and provided compelling proof, if any were needed, that CLS settlement is critical to financial market stability and that this model should be extended further across the globe.

In 2008, market sentiment deteriorated rapidly and money and capital markets were brought to a virtual standstill; all markets bar foreign exchange, which continued to function without disruption. Following the collapse of Lehman Brothers, no losses were taken if settlement took place through the CLS system.

This is thanks, in large part, to the collaborative efforts of the industry in coming together to create CLS. It has proven a robust and technologically successful solution to mitigating risk, with the formation of the CLS settlement model and our organisation.

The coming years will prove crucial in shaping a strong, healthy and risk-free trading environment in currency markets.

We are working to extend the use of CLS to other currency markets across the world.  The benefits of using the CLS system include settlement risk mitigation, improved liquidity, multi-lateral netting, operational and IT efficiencies as well as business growth opportunities.

Greater use of our settlement model will pay enormous dividends, both in added value and in risk mitigation, giving individual institutions confidence in the FX market’s structure and contributing to global economic stability.

The case has been made and the technology is proven.

We welcome the wisdom of the US Supreme Court judgement. CLS can now continue its mission to enhance financial stability by providing risk mitigation services to the global foreign exchange market.