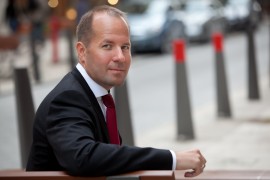 “Mobile and online banking is booming at the moment, all around the world,” says Balázs Vinnai, perhaps giving a hint as to why core banking technology vendor Misys recently turned a year-long cooperation agreement into a full-scale takeover of his firm IND Group, giving it some much needed cool and industry buzz, writes Neil Ainger.

“It is a very exciting deal for me personally, the senior management team and the entire IND staff which are joining me at Misys. I am looking forward to accessing the reach, scale, development and sales and marketing support that Misys can provide on a global scale and growing the digital channels segment at Misys using their established technology and the products from our former IND Labs.”

The peer-to-peer payments functionality and the use of its Essence m-banking personal finance management tool were recently demonstrated by IND staff at the Finovate Europe 2014 event in London, under the Misys’ Bank Fusion brand name, alongside a range of other white-labelled and digital channel electronic e-commerce offerings. The expanded new Misys digital channels unit, including chief innovator Jozsef Nyiri, were one of the nine ‘best in show’ winners, out of 67 presenting companies.

Vinnai is keen to point out the vendor does not just do transactional or payment applications, and instead focuses on functionality as its core developmental goal. “We want to help clients and consumers’ entire financial life, not just their transactions, so customer convenience, alerts and reporting and tracking are all important to us,” he says. “Allying easy functionality to transactional capabilities is what we’re about.”

Consumers increasingly want to use online and mobile mechanisms at their primary interface with their bank, migrating away from the branch, and Vinnai believes the combined IND-Misys entity can help deliver this full service customer experience, which not only covers payments and transactions but also loyalty, invoicing and other functionality.

IND had 250 staff, mainly in its Budapest headquarters in Hungary, which have transferred over to Misys following the completion of the takeover, while remaining in the same offices. The group had amassed 40 bank clients since its founding in 1997 with big players such as UBS and newcomers like the Polish bank Alior on its client list, which also includes Erste Bank, UniCredit, Raiffeisen Bank Hungary and others.

For Vinnai the key thing is the deal gives the new expanded digital channels unit at Misys the scope and capabilities to truly impact the market. “We can offer a full package solution, covering payments, PFM bank account checking, mobile m-commerce capabilities and a host of other functions, targeting so-called ‘greenfield’ new banks and more established banks some of which will already be users of the Misys core banking platform.”

“There are fast-growing markets in Africa and Asia where Misys’ global reach can really accelerate the business. IND Group was strong in Europe and the Middle East but it did not have so many customers in North or South America, Asia or other parts of the world where Misys has truly global reach. Misys also has an established banking customer base using its core banking technology which IND apps can easily fit into. Combined, the new entity can really have an impact.”

IND specialises in designing digital banking applications that can fit into a service orientated architecture. Traditionally their digital applications have always been able to integrate with any core banking technology system, regardless of the vendor, providing bolt-on functionality and new mobile and online services as required.

“Development work will continue in Budapest and the surrounding countryside and the old IND Lab’s work will benefit from Misys’ help and extra resource,” says Vinnai. As with all such technology takeover deals, however, the level of research & development work is now dependent on wider enterprise-wide goals, serving the treasury and corporate cash management markets as well as the banking ones, for instance, and it has to be up for debate how much extra money will go into specific digital channel work.

The fact that the old IND Lab team remains, however, is perhaps a good sign that Misys intends to use this opportunity to catch up and maybe overtake some of its rivals’ online and mobile channel offerings by investing in the business. Misys has ambitious plans to succeed in the evolving digital channels segment in both the back and front-end of the business and it will be interesting to see its development plans post-acquisition, with Vinnai on board to guide the ship.

The flexible SOA-based nature of the products is increasingly attractive to banks as they reduce headcounts at their own internal IT departments and look to replace aging, siloed infrastructures in the ‘West’, in order to cope with increasing market demand for 24×7 customer service. The need to refocus on non-operational staff priorities, such as compliance activities, is also adding to the demand for more flexibility.

Increased regulatory reporting duties post-crash and the higher operating costs of the ‘new normal’ banking environment under the impact of the pending Basel III capital adequacy rules and much else besides, is an additional driver for the need to cut operational running costs and a multiplier of the move towards more flexible Software-as-a-Service based operating environments. These can scale up and down as required and launch new products to market more quickly.

For newcomer banks in developing countries or challenger banks fighting established players in already developed markets, avoiding the silo trap in the first place is the key driver towards SOA architectures and/or SaaS-based contracts. When Metro Bank came to the UK in 2010, for example, it outsourced its entire core banking technology provision to the rival Temenos T24 platform, only retaining a very small internal IT team centred around its chief operating officer Aisling Kane, rather than following the traditional build-out approach which is fast falling out of favour at banks – even the licensing ‘off-the-shelf- approach is declining as some banks don’t want the expense of the support staff it seems. It is this kind of ‘on-demand’ marketplace that Misys is scaling up for with its IND acquisition.

“The SaaS model is gaining ground quickly in the banking technology marketplace,” says Vinnai. “I am a firm believer in it as it helps banks to be faster and more nimble. The link-up with Misys will help me and my old IND colleagues in Hungary because SaaS demands global reach and scale to service the largest banks. The expanded digital channels unit at Misys can tap into this.

“In the US the SaaS model is very popular, but the diverse legal and national boundaries in Europe and the Middle-East mean it is less prevalent there so far, although I do think this is changing. Certainly it is a trend you cannot ignore.”

IND often used gamification techniques in its PFM and digital e- and m-commerce tools to appeal to young wired customers and give banks’ 21st century customers an up-to-date platform. It followed an open SOA-like approach, reliant on common standards and languages like Java or such-like to ensure it was interoperable and flexible enough to plug into almost any core banking system, with appropriate security. As such, it is a good fit for Misys which has lacked this interoperable capability in recent years as its platform aged and its readiness for the digital banking world of the future was questioned.

The integration fit and rationale behind the deal is therefore clear: Misys expects to put such questioning of its platform to an end by overhauling it with IND technology, gain some cool and new digital and mobile functionality and innovative tech staff. Consequently, it expects to win new business as the customer-centric approach to omnichannel banking gains ground and branches fall out of favour.