The man from CHAPS 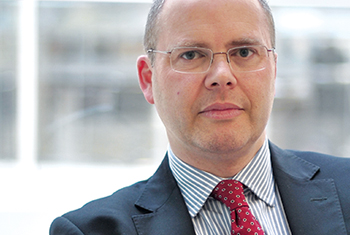 Kenworthy: adhering to a steeper set of standards

The UK’s Clearing House Automated Payments System turned 30 earlier this year. It wasn’t an anniversary marked with street parties by a grateful nation, but in its quiet way it was a significant moment, for – in common with the whole payments infrastructure – the system is going through a period of change.

Phil Kenworthy, managing director of CHAPS Clearing Company, said that the organisation has come a long way from its origins of Town Clearing, which, prior to 1984, was the only means of making high-value same-day payments.  This was a system using cheques drawn on banks in the City of London and a process that literally involved people going around London to collect the physical cheques.

It has now grown to process significantly larger values than any other UK payment system – while in volume terms it handles some 0.4% of UK payments, in value terms it is processing over 92% of all intra-bank payments.

Kenworthy came to CHAPS two years ago “pretty much as some fundamental changes were starting to take effect”. The first stemmed from the Banking Act 2009, which formally brought CHAPS under the oversight of the Bank of England. (Perhaps surprisingly, there had previously been no direct supervision of the system.)

The Bank of England is a familiar master for Kenworthy – staight from school, he started his career there in 1982, working in a variety of IT and audit roles, which culminated in him transferring in 1996 to the post of Head of Internal Audit at CRESTCo  (the operator of the CREST securities settlement system), for which he later became Head of IT operations.

Coming under the purview of the Bank of England meant that CHAPS became a Financial Market Infrastructure, which means adhering to a wider set of rules, including international standards like the those from CPSS-IOSCO – the Committee on Payment and Settlement Systems and the International Organisation of Securities Commissions – which, in 2012, published a substantively enlarged set of Principles for financial market infrastructures and last year began a consultation on the implementation of recovery and resolution regimes for FMIs.

“That was a defining point, in that we had not only been designated as a Payment System by Treasury and become an FMI, but there was also a much steeper set of standards to adhere to,” says Kenworthy.

On top of that the Bank of England looked at the way CHAPs membership was tiered and realised that a substantial amount of the daily value going through the systems was being generated by Indirect Participants of CHAPS, and that could pose a significant risk.  In Payment Systems such as Fedwire and Target II, there was a far broader Direct Participant base which meant this risk was substantively mitigated.

For Kenworthy this was another defining moment, but also a familiar one: After leaving CRESTCo at the end of 2000, he had moved to CLS, where he was director of audit for five years before taking over as director of operations, a post he held until joining CHAPS in April 2012. “It was exactly what I had previously experienced at CLS – the essence changed between a utility that had members and participants to an organisation that to own and operate and manage risk within its wider ecosystem, and to monitor what is going through the system as opposed to just providing a service,” he says. “Our obligations have grown quite substantially on the back of that.”

The most substantial obligation is monitoring the liquidity flows within the system, which is used by very large institutions to settle Sterling on a daily basis, and this has led to changes in its ‘participation base’. There are now 20 members and 4,500 indirect participants, with more international banks now joining as direct participants.

At the end of last year Swedish bank Handelsbanken joined CHAPS as a full direct participant independently of the Bank of England’s de-tiering initiative In parallel, it was announced that BNY Mellon, ING Bank, Northern Trust, BNP Paribas and Société Générale were stepping up from being indirect participants and, as Direct Participants, will be able to send and receive in their own right irrevocable, guaranteed sterling payments with same day settlement finality. A total of 25 banks will be CHAPS direct participants by the end of 2015, an increase of 11 since the 2007/2008 financial crisis.

The calculation used to determine which banks should become direct participants – embodied in the CHAPS Tiering Criteria – give an idea of the sums involved: in short, if an Indirect Participant’s daily average value flows through CHAPS exceeds 2% of the total CHAPS payment flows (sent and received) then that institution needs to be considered for direct participation.  When the Tiering Rules were introduced, the 2% figure stood at £10.16 billion and now stands at £12.6 billion

What focuses the minds of those in charge of this is the question of what happens if one of the larger participants were to go down for a period – as a result of IT failure, rather than bank failure – with a potential knock-on effect on the liquidity flows of other large participants (particularly if they are handling substantive values on behalf of large Indirect Participants). “We have to be cognizant of the effects of any events on the wider ecosystem,” he says. “Our world is all about correspondent banking, so we work very closely with the Bank of England to manage those pinch-points and ensure that things don’t build up.”

An example of how it is approaching this is the Liquidity Savings Mechanism introduced last year. This allows CHAPS Participants to offset the majority of payments in batches throughout the day. Simulation studies by the Bank suggest that the introduction of the LSM could reduce the system-wide intraday liquidity needed for CHAPS settlement by around 30% in the long-term.

Kenworthy says that further initiatives to decrease risk are in the pipeline.