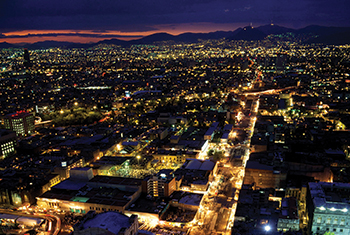 Physically in North America, bordering the Central American country of Guatemala to the south, Mexico is culturally part of Latin America. After many years of struggle, Mexicans may be about to snatch the crown of Latin America’s most promising financial services market from their Portuguese-speaking cousins in Brazil.

Mexico has a population of 112.8 million according to the World Bank, of which approximately 60% is under the age of 25. It is also a country with a strong government reform agenda, being driven by the ambitious and pro-reform President Enrique Peña Nieto, who took office in December 2012.

Under Nieto, for the first time in more than 70 years the Mexican constitution has been amended to allow international investors to explore and extract oil and gas, breaking the monopoly long held by state oil producer Pemex. Private firms will be allowed to share profits, production and risk with Pemex. The news has excited foreign investors around the globe, with Citi recently predicting that Mexican oil production could double, adding 2.5 million barrels of oil per day. On 6 February, Moody’s investors Service upgraded Mexico’s credit rating to A3, citing government initiatives to open up the energy industry to foreign investment and broaden its tax revenue.

“There’s a huge opportunity in Mexico,” says Philippe Carré, global head of connectivity at financial technology business SunGard. “The government willpower to push liberalisation shows it has the ingredients of a promising market. The government is introducing competition in the energy sector, liberalising the economy, and building a pension system. We are bringing in new clients to Mexico, and we believe it is in fact the market to watch.”

At the heart of Mexico’s capital markets is the Bolsa Mexica de Valores, located in Mexico City. The exchange has a market cap of $460 billion and 466 listings – more listings even than Brazil. Over recent years, the exchange has incorporated all the aspects of modern electronic trading including algorithms, direct market access, and co-location facilities. Meanwhile, the derivatives exchange MexDer has undergone a similar transformation and allows remote membership.

The country still faces significant problems. Carré notes that Mexico has a reputation for crime, corruption and violence that is difficult to change. The pension system is underdeveloped, and local participation remains low. Furthermore, not everyone is happy about the direction the new government is taking towards greater openness and globalisation. In February, 65,000 people protested in Mexico against the Trans-Pacific Partnership, a trade agreement between Australia, Chile, Canada, Japan, Malaysia, Mexico, New Zealand, Peru, Singapore, the US and Vietnam. Opponents of the partnership are worried that it will force small farmers off their land, Mexican farms will be privatised and collectives shut down, and local producers forced to compete with cheap Vietnamese imports.

“A bright future is possible,” says Carré. “Brazil’s government is currently bogged down, whereas Mexico is more business friendly. Economic activity is rising. At the same time, the gap between rich and poor is an issue that will need to be addressed, in Mexico as in other Latin American countries.”

As with many other emerging markets, Mexico has benefitted from the rise of mobile technology in recent years. According to Serge Elkiner, chief executive and co-founder at YellowPepper, a Miami-based mobile payments start-up company, the country currently stands on the brink of a mobile payments revolution. Not a revolution filled with gun smoke, red flags and political slogans, but a revolution in how Mexicans think, spend and save money.

YellowPepper bases its optimism on the observation that mobile penetration is rising fast, and reached 87% in Mexico in 2012, up from 82% the previous year. According to Elkiner, 97% of adults in Mexico now have mobile access, while 77 million have access to the financial system, yet only 56% use financial products. At the same time, Mexicans spent about $8 billion using mobile devices last year. This is the opportunity that Yellow Pepper is looking to tap.

“Since the introduction of the credit card in Mexico in the 1950s, adoption of new financial technologies has been slow, if steady, as many Mexicans simply did not have access or the financial wherewithal to qualify,” Elkiner told Banking Technology. “However, with nearly all Mexicans having access to mobile devices and smart phones becoming more ubiquitous by the day, the mobile phone is poised to bring about a revolution in financial access and inclusion that promises to make the lives of millions easier, safer and more efficient.”

YellowPepper plans to launch a Mexico payment service in April. The company will focus on using mobile as a platform to link loyalty schemes, offers and promotions in one place, effectively replacing various plastic cards. YellowPepper is basing its efforts on smartphones, which it says are crucial to its plans for Mexico because they combine the necessary level of security for a viable payments business.

“We’re talking about the use of a public key, and private key,” says Elkiner. “It’s a system as secure as a PIN number. It’s a portion of the API. When you download the app, it puts a private key on the phone, registering your phone and your SIM. So if you use another phone or SIM, it won’t work because it knows it’s not you. That’s one form of security, in addition to the phone itself, which will also have a PIN.”

“Our vision of the future is to have all transactions taking place on the mobile phone – that is the future of payments here in Latin America,” adds Elkiner. YellowPepper plans to expand to Ecuador later this year, to be followed by Guatemala and a total of nine Latin American countries.

Meanwhile, the growth of the mobile has also enabled Mexico’s market for personal and business loans to expand dramatically. Mobile lenders have quadrupled in the country over the last six years, according to Keuski.com, a Mexican microfinance company that focuses on small loans to Mexicans.

The rise of the sector has brought access to financial products to people that previously barely interacted with the financial system. Just 25 million of Mexico’s 120 million population had a bank account as of January 2013. At the same time, there are upwards of 70 million mobile handsets in the country, according to figures provided by fraud prevention and payments processing firm Alaric.

“There is a high demand for loans and credit, but there are very few options that most Mexicans can access,” says Adalberto Flores, cofounder and chief executive at Kueski.com. “There are 30 million pawnshop loans granted in Mexico every year, which require users to give collateral in exchange and require a physical visit to a place that is often in a dangerous community. Additionally, there are street loan sharks, commercial bank loans which only very few Mexicans can access, and micro finance institutions.”

Kueski itself is a loan service in which Mexicans can apply for a loan via computer or smart phone. It doesn’t require any collateral, nor a personal meeting with the borrower. The company draws on sophisticated techniques to assess its customers – including exploring their social media data. Kueski has a Big Data team composed of particle physics scientists, who use machine-learning methods for risk assessment. The firm’s risk algorithm explores credit history, a credit questionnaire, analytics and user behaviour on Kueski’s website, online activity including a social graph and online presence, as well as socio-demographic information.

While some might balk at the prospect of financial services firms using people’s private social media to make decisions, Kueski responds that users are never forced to share their social media profile – sharing the information is optional. The company insists that all the information it uses is either public, or was analysed with the permission of the user.

“Due to more than 20 years of constrained consumer credit, many generations of working Mexicans have never established a meaningful credit score,” says Flores. “The lack of robust credit score data and the need to keep default rates low restrains the ability of traditional Mexican banks from entering the mid-market for consumer loans. By using alternative information such as social media, we are opening the possibility to dozens of millions of users to have access to faster and easier credit.”

Kueski is supported by cloud computing firm Mambu, which provides technology and computing power for its services. Mambu supplies the customer relationship management platform, accounting and systems integration. The firm keeps its data onto Mambu’s cloud platform; it has also helped Kueski connect its payment gateways with banks.

Mambu has 10 customers in Mexico, the majority of which are mobile phone companies rather than deposit-taking institutions. “Mexico is seeing a professionalisation of the lending segment,” says Eugene Danilkis, chief executive and cofounder at Mambu. “The country has good internet coverage, but poor physical distribution. We wanted to build a cloud-based banking platform that would help banks and other financial services firms to leapfrog the physical stage.”

By 2016, some 54% of Mexicans will have internet access, according to figures provided by Ipsos OTX and Ipsos Global Advisor. This compares against 21% that have a conventional bank account.