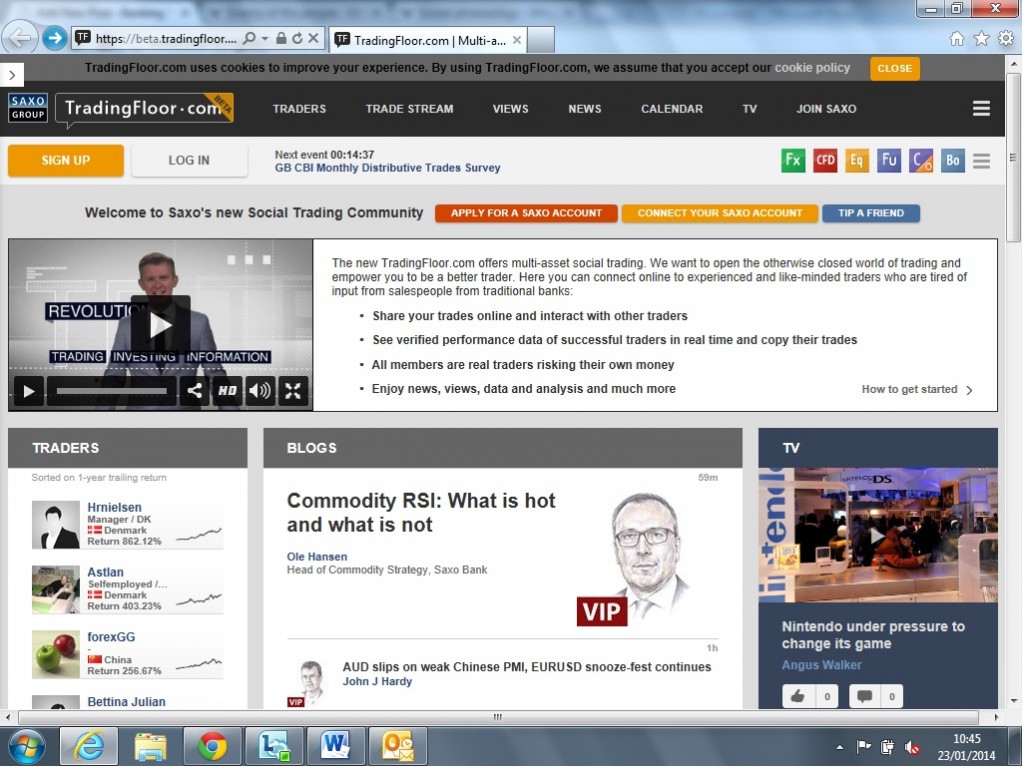 Denmark’s Saxo Bank has built an online social trading community called TradingFloor.com, which draws on social media concepts such as LinkedIn and blogging alongside Bloomberg/Reuters style market data and news in an attempt to make trading more ‘social’.

Founded in 1992 in Copenhagen, Saxo Bank is marketing the new website as a community-based alternative to what it terms “traditional” banks in the 25 countries it covers. The bank argues that by enabling investors to share their trades openly, interact with each other, post comments and strategies, discuss ideas, follow and copy each other, it will make a better market.

“We want to set free the peer-to-peer power of traders around the globe by enabling them to connect online with experienced and like-minded investors who are tired of input from salespeople from traditional banks,” said the bank’s co-founders Kim Fournais and Lars Seier Christensen. “We want to democratise access to trading and fund management by opening up the otherwise closed world of trading. We believe that this may radically change how investors will go about trading FX, CFDs, options, futures, bonds and equities in the future, making trading a social experience.”

Saxo Bank built the site with its own dedicated team from scratch. Users can share, ‘like’ and comment on others’ trades. It’s designed to be simple, so traders can read a trade idea and place an order using one click. There’s also a reporting system tied into analysis, so that traders can check their own performance over varying time periods and criteria. In time, the bank plans to expand the site with recommended trade ideas and blog posts based on behaviour analysis.

There have been several attempts to incorporate social media into trading in recent years. One of the earliest appeared in November 2012, when French company IoSquare launched a social media sentiment index that can be used to track positive or negative tweets on a given stock or topic. It was released on the Bloomberg App Portal. In April 2013, Bloomberg added real time Twitter feeds to its Bloomberg Professional service so that market participants could use twitter updates from corporations, executives, governments, media outlets and other sources to help make investment decisions.

Meanwhile in January 2013, online trading service DCM Capital released a trading platform with a social media sentiment feed, allowing traders to incorporate information from channels such as twitter and Facebook into their trading decisions. The following month, NYSE Technologies reached a deal with specialist company Social Market Analytics to provide social media sentiment statistics via its market data feed SuperFeed and SFTI network. Then in October, UK-based fintech firm Eagle Alpha launched a new tool called Social Sonar, which it claimed could help banks and their clients gain a decisive trading advantage over their rivals based on Twitter posts.

“At the new TradingFloor.com, you can see what the best participating traders are doing with their own money in any asset class of your choice,” added Foumais and Christensen. “We are deliberately only featuring real traders with real accounts trading their own money to ensure a social trading community of serious investors.”