Russian broker BCS Prime Brokerage is a relatively new entrant into the London financial services scene, having gained a licence in June 2013. Yet as Moscow modernises its corporate governance, legal institutions and financial infrastructure, new possibilities are opening up for it to capitalise on rising foreign participation, says Tim Bevan, executive board member at BCS.

BCS Prime Brokerage is the largest trader of equities and derivatives on the Moscow Exchange. Bevan joined the company from rival Russian broker Otkritie, where he was director of global electronic trading. He defected to BCS in March 2012 together with former Otkritie chief executive Roman Lokhov, who now serves as head of global markets and investment banking for BCS. The firm’s main competitors are Otkritie, and Renaissance Capital.

“Russia is becoming a more normal market,” Bevan told Banking Technology. “Every time I visit Moscow, Russia seems to have matured a little bit more – it’s perceptible each time. This year we are expecting a major push to centralise corporate actions on Russia’s NSD central securities depository, which will be a huge change. Under the old system, people hid behind the rules, ticking boxes and abusing inefficient and obscure legal processes. With centralisation at the NSD, that kind of behaviour is going to be much harder to get away with.”

BCS bases its business on its regional network across Russia, which the firm identifies as important for second and third tier liquidity. The brokerage mainly handles retail flow, which it says is significant enough for it to receive volume and execution discounts at the Moscow Exchange, as well as to provide opportunities for internalisation, which the bank is currently considering.

Known for its oil industry, Russia has been dogged by a persistent negative reputation due to endemic corruption, politically-motivated arrests and seizure of private companies by the state. The fate of Mikhael Khordokovsky, former chief executive of Russian oil company Yukos, stands for many as a symbol of the dangers of the Russian market. Khordokovsky and his associates spent 10 years in prison, ostensibly on charges of tax evasion, but it is widely believed that the true motive for the accusations was the desire of Russian president Vladimir Putin to silence a potential political rival and steal Yukos’ assets in the process.

However, there are signs of positive change. Under prime minister Dmitry Medvedev, there have been efforts to reduce corruption and reform Russia’s financial services infrastructure. In particular, a major state-sponsored initiative to turn Moscow into a global financial centre has provided the impetus for a number of significant changes. In 2011, the country’s RTS and Micex exchanges merged to form the Moscow Exchange. Western companies such as TMX Atrium began investing in high-speed connections from Europe to Moscow via Finland and Germany. Last year, two major changes were made: T+2 settlement was introduced, replacing the former T+0 cycle, and a central securities depository (NSD) was established.

“By far the most important thing that happened last year was the arrival of NSD,” said Bevan. “Forget execution. Post-trade is where the cost and the risks lie. These changes have brought the big banks in – Citi, Morgan Stanley, BAML – and together with other reforms they are making this market much more recognisable, which theoretically should lead to a lot more foreign participation.”

Bevan added that as the Russian market becomes more attractive to foreign investors, the need for the depository receipts business located in other countries should diminish, leading to much liquidity returning home to Russia – an effect he says has already been observed in other markets such as Turkey and Poland, which once had significant DR business in London. 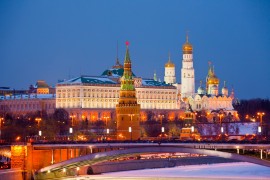 That is significant, because one of the major motives for the Russian financial centre project is the fact that the majority of Russia’s biggest companies have chosen to list in London on the LSE’s international order book, rather than in their home country. As a result, there have been relatively few IPOs in Russia in recent years, while Russian energy giant Gazprom is the LSE’s most traded stock. Putin and the Russian government want to bring that trading activity home.

“This is a sign that Russian companies are forced to go abroad to look for money to finance their development,” admitted Putin in a speech on 25 January 2013. “This is sad. We have taken a number of measures to improve the financial infrastructure of late. Our task is to make the Russian stock market competitive in the full sense of the word, make it attractive for Russian and foreign market players. It has to meet business’ demands and also be up to our new and more ambitious economic development goals.”

Many problems remain. Capital flight is a major issue, according to Bevan, as is the weakness of the judicial system, which currently means that investors in Russia cannot rely on the rule of law. Meanwhile, the domestic pension market presents another challenge, as there is currently little institutional domestic liquidity in Russia – a situation that Bevan believes will take “a lot of political will” and a decade or more to achieve. “An independent judiciary is vital,” he added. “Strong, independent institutions account for a significant chunk of the difference between an emerging market, and an ‘emerged’ one.”

At present, the Russian government and central bank is engaged in a major push to make the ruble a global reserve currency, which if successful should reduce the pressure on the currency versus the dollar, leading to reduced capital flight. Efforts have also been made to better connect Russia to the global financial system. Among the most significant of these is a deal between Belgian post-trade services company Euroclear to begin trading Russia’s corporate and municipal bonds from 30 January 2014. According to Bevan, the availability of Russian assets on Euroclear should increase the number of investors interested in Russia by “a huge factor”. Meanwhile, the Moscow Exchange saw its turnover increase to £810 billion in December, up 24% on the year before.

“Russia has changed a lot,” said Bevan. “Look at how far Moscow has come. The market used to be totally alien. The legal system didn’t have all the normal tools you expect to use in business – recognition of trustee, nominee, and so on – the concepts didn’t exist in Russian law. It has taken a root and branch legal and infrastructure program to create an internationally compatible.  There’s a rising middle class, and you can see it on the streets in Moscow. Russia will continue to modernise – it’s just a matter of time.”