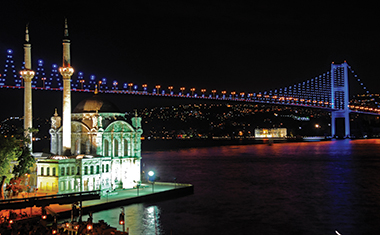 Like the Rumeli Hisari castle that overlooks the historic entrance to the Bosphorus on Istanbul’s European shore, Turkey’s banking infrastructure has weathered its fair share of storms over the years. Now, however, innovative new technology is leading the path to a new model of banking in Eastern Europe’s largest market.

Just as Turkey’s heartland in Asia Minor has proved a melting pot of many ancient and medieval civilisations over the centuries, so too the country’s modern banking infrastructure blends foreign and local influences. There are a large number of banks in Turkey, from international players such as Citi, Deutsche Bank and Bank of America Merrill Lynch, global banks that provide retail services such as ING, HSBC and Sberbank, and many local Turkish banks such as Akbank, Garanti Bank, Yapı Kredi Bank and Ziraat Bank. There is also a growing contingent of regional banks, such as Kuwait’s Burgan Bank and Pakistan’s Habib Bank.

Of the local banks, some of the best-known were founded in the 1920s during the time of Kemal Atatürk, Turkey’s first president. These include Türkiye İş Bank and Türk Ekonomi Bank. Many others have been founded since the early 1980s, with at least 29 banks either being created or entering the market for the first time since 1980. The newer entrants include specialist local banks such as Tekstilbank and Finansbank created by Turkish entrepreneur Hüsnü Özyeğin.

The largest retail bank branch network in Turkey belongs to Ziraat Bank, Turkey’s oldest bank dating back to 1863, with 1,510 branches as of September last year. The next four banks are Türkiye İş Bank, Akbank, Garanti Bank and Yapi Kredi, all of which have more than 900 branches each. The same five banks also hold the highest value in terms of total assets, although by this measure Türkiye İş Bank is the largest.

The nation’s banking infrastructure is underpinned by strong and rising economic performance. In 2012, the country’s GDP grew by 2.2% – a dramatic fall from the 8.5% rise seen in 2011. Nevertheless, it is estimated at 3.4% for 2013 according to figures from the IMF. Turkish growth averaged 3.6% over the last decade.

“Over the last few years, the Turkish retail banking market has been one of the most innovative,” said Alex Bray, retail channels director at bank technology vendor Misys. “Işbank has rolled out the largest biometric ATM network in EMEA, with 3,500 biometric ATMs with finger vein scanners. Ziraat Bank is also a biometrics pioneer, having rolled out another 1,500 biometric ATMs.”

Innovative approaches to ATM usage are emblematic of banking in Turkey. The country’s Kuveyt Türk Bank is currently working on a new generation of ATMs, branded as ‘XTMs’ – X for eXtreme – which it is using to reach more remote areas of the country and make contact with the unbanked. Customers can use the XTM to open an account, to apply for a credit card, receive a debit card, handle cheques or even to buy and sell gold.

“Building XTMs that act as a branch is an experiment,” said Mehmet Çepni, product development assistant associate at Kuveyt Türk. “We can reach places where other banks don’t have a presence, or locations that may not be suitable for a branch. The cost to open an XTM is around 10% of the cost for a new branch – so it gives us the option next year to build perhaps 40 branches instead of 50, and use the extra funds to install 100 XTMs.”

In 2012, 40 million of Turkey’s 72 million population – 56% – were unbanked, according to the World Bank. This compares against an estimated 8.2% of households in the US, according to a landmark study carried out by the Federal Deposit Insurance Company in 2011. A similar study found 1.54 million unbanked adults in the United Kingdom in 2009.

The introduction of the XTM network requires the introduction of instant card production so that the machine can dispense a card to a new customer on the spot in a location such as the village of Gumushane, about 100 kilometres south of Trabzon, on the Black Sea Coast. In Turkey, such a service is not widely offered by the bank’s competitors, according to Çepni. Even in the UK, High Street banks such as HSBC routinely post out debit cards rather than issue them on the spot, while Metro Bank prints cards in store.

As in many other markets around the world, mobile banking is increasingly important in Turkey. A recent survey by ING found that 49% of Turkish internet users bank with their mobile devices, putting Turkey at the head of the European market in terms of adoption. By comparison, the figure for the UK was 35%, while the Netherlands and Spain stood at 44%. Overall, mobile phone penetration in Turkey had surpassed 90% by March 2013, according to figures from the World Cellular Information Service.

Meanwhile, Kuveyt Türk is currently working on mobile banking tools for Windows 8, which will allow users of Windows-enabled smartphones to bank via their mobile device. The service will provide customers with information on their current account, as well as details about how the bank is handling their money and various other information designed to make banking more transparent.

“Channel technologies are particularly important in Turkey,” said Bray at Misys. “Misys is developing a series of mobile applications and proofs of concepts in gamification (Misys BankFusion Gameo) and Augmented Reality (Misys BankFusion Concierge) to push innovation even harder in this competitive market. Misys has relationships with Işbank, Garanti, and Akbank in Turkey, among others.”

Sometimes, mobile banking services overlap with ATM networks. In January, Türk Ekonomi Banki released a new version of its pocket mobile app for iPhone, which allows users to withdraw cash from an ATM using just a smartphone and a QR code, instead of a plastic card. The customer prepares the transaction on their phone in advance, then scans the QR code on the ATM screen with their smartphone. The app also allows users to transfer cash, buy and sell funds and pay bills.

Another example of the union of mobile banking and ATM technology was unveiled at the beginning of August, when Kuveyt Türk launched a new service called Gold Send. The service consists of a mobile app that allows users to withdraw gold from the bank’s ATMs and branches, using a mobile device. While it had been possible to use an ATM to withdraw gold in Turkey since 2011, the launch of the app meant that users could SMS a code to a family member or friend elsewhere in the country or even from abroad, allowing them to withdraw the gold themselves without necessarily having a bank account of their own. The project was also notable for the way it acknowledged traditional Turkish society and the high prestige it still attaches to gold, and the prevalence of mobile phones in Turkey. Meanwhile, Turkey’s financial institutions have also embraced other separate trends, such as the rise of social media.

“With regards social media, all the major banks in Turkey are very active using social media to drive marketing campaigns and product applications,” said Bray. “Garanti Bank has 1.455 million Facebook ‘likes’, while Akbank has 1.411 million – compared with 40,000 people who ‘like’ Lloyds TSB.”

Despite progress in broadening the reach and depth of banking choices in Turkey in recent years, the growth of the country’s banking infrastructure has been accompanied by challenges in the payments system that underpins it. In particular, the rise of online services has posed a challenge for banks and their customers.

Turkey has seen significant growth in online payments in recent years. In 2012, an estimated £10.4 billion worth of goods were sold online, compared against £7.8 billion in 2011. ETID, the association of Turkish internet retailers, expects the volume of business to double by 2015 and reach £107.4 billion by 2023.

However, one of the obstacles to further growth in the country has been fragmentation. Consumers in Turkey often use local credit cards, debit cards and loyalty cards that are issued in their own regions and processed exclusively by local banks. This can be a problem when attempting to purchase goods online, since local cards may not be supported.

Fortunately, recent months have seen attempts to unify the system. In July German payment infrastructure company PAY.ON and Istanbul-based Turkish payment network Iyzi Payments formed a deal with several major Turkish banks. Under its terms, Garanti Bank, Isbank, Yapi Kredi bank and others, which together cover an estimated 50% of Turkish cardholders, will connect to PAY.ON’s PayPipe service, which is designed to connect global payment market participants with each other anywhere in the world. Barbaros Özbugutu, chief executive at Iyzi Payments, said that the collaboration between his company and PAY.ON would “vastly facilitate access to the Turkish market for foreign companies”