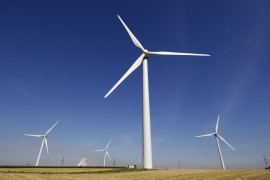 South Africa’s Nedbank has opened a bank branch powered entirely by renewable energy, a move that it claims is the first of its kind in Africa.

Situated in Cape Town at Lansdowne Corner, the branch uses a hybrid power installation that runs independently of the national grid. Drawing on solar and wind energy it converts these into standard mains electricity which it feeds back onto the national grid, effectively cancelling out its own consumption.

Kestrel Renewable Energy was contracted by Nedbank to carry out the installation, which was designed to provide the branch’s full annual electricity demand of 70 000kWh. The company has estimated that the installation helps to lower South Africa’s total CO2 emissions by 71 tonnes per year, equivalent to 25,000 litres of petrol.

According to Nedbank, the branch is also economically viable – it estimates that at the current rate of usage, the branch will have recouped its setup costs within two years whereas the average bank would only achieve this in five years.

“The off-grid hybrid installation offers proof of what can be achieved when organisations have a genuine vision for, and commitment to, contributing to a greener future for our country,” said Ciko Thomas, managing executive of consumer banking for Nedbank Retail. “It builds on the similar success we have achieved previously with the implementation of South Africa’s first partially wind-powered bank branch in Du Noon, also in the Western Cape, unveiled in 2010.”