Where the world is your lobster … 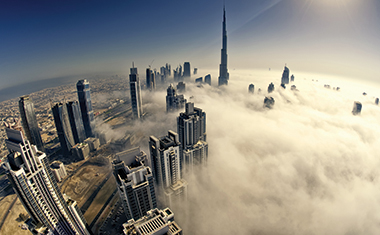 As an increasing number of tourists are attracted to Dubai for the sun, sand and shopping, it is easy to forget that it is a Muslim city, and there are codes of dress and behaviour that should be borne in mind if you don’t want to cause offence.

It’s unlikely that Sibos delegates will be wandering about the shopping malls and restaurants in short skirts and bikini tops, but it is astonishing how many visitors do. Some locals have taken to handing out cards specifying respectful dress to inappropriately attired visitors.

The basic rules are to dress modestly and keep the swimwear for the beach and poolside. The Government of Dubai says shorts and t-shirts are acceptable in most places, but if you’re going to a mosque or walking around the more traditional parts of the city, loose-fitting clothes that cover shoulders, arms and legs are more appropriate. Women visiting mosques should expect to be asked to wear a headscarf.

Local law means that restaurants not based in hotels don’t serve alcohol, and while alcohol is freely available, and enthusiastically consumed by locals and visitors alike, being drunk in public is unacceptable. Also unacceptable are public displays of affection – holding hands is okay, but hugging and kissing is not. The government also reminds you that “the following are also considered illegal in Dubai: use or possession of drugs, cohabitation, sex outside of marriage, having a baby out of wedlock, adultery and homosexuality”. Not all of which are likely to bother Sibos delegates.

The world is your lobster when it comes to eating: from Al Dhiyafah Road – renowned for its range of cheap eats and outdoor grills, and a good place to wander about soaking up the smells and atmosphere – to outposts of international superstar chefs. UK potty-mouthed chef Gordon Ramsay pulled out of Dubai in 2011, but there are rumours he’s planning a comeback this year.

The overall winner in the Time Out Awards was La Petite Maison, a French restaurant in the Dubai International Financial Centre (+971 4 327 9795). The food is based on Provençal cooking but the restaurant has the “fast-moving buzz of a Parisian eatery” and has adopted the Mediterranean practice of offering smaller sharing plates.

On the international fine dining scene, the Armani/Amal at the Armani Hotel (next to the Burj Kahlifa) is an Indian restaurant that gets rave reviews for its fish. It overlooks the Dubai Fountain, the world’s largest choreographed fountain, built by the same firm that did the better-known Bellagio fountains in Las Vegas. There are displays every half hour. The restaurant opens for dinner at 19:00, closing at 23:00. (+971 4 888 3444)

British foodies wondering what happened to Gary Rhodes, one of the original celebrity chefs, will be spoilt for choice. He’s been in Dubai since 2007 and has several outlets, including Rhodes Mezzanine, in the Grosvenor House Hotel at Dubai Marina (+971 4 399 8888) where he does his upmarket versions of British classics (cooked using French techniques). His bread and butter pudding is outstanding. A newer outlet is Rhodes Twenty10, at Le Royal Meridien Resort and Spa, Dubai Marina (+971 4 399 5555). This serves similar British food, but is primarily a top-end steakhouse.

French molecular gastronomy wizardry features at Reflets par Pierre Gagnaire, in the InterContinental Festival City, (+971 4 701 1127). Gagnaire is one of the pioneers in the field, working with Hervé This, the “father of molecular gastronomy”. Expect to pay top dirham.

Near the Dubai World Trade Centre, there’s a strong possibility that many delegates will find McGettigan’s DWTC a useful watering hole. It is slap-bang between the metro station and the conference. A pretty standard Irish bar, it serves typical pub food at lunchtimes and has a swankier restaurant upstairs (+971 4 378 0800). There’s live music later in the evening (and free drinks for women from 20:00 on Wednesdays).

Another Irish restaurant that has become a Dubai fixture is The Irish Village. It has fake shop fronts to make it look like a village, but it’s just one restaurant. It attracts polarised reviews, but is still heaving with expatriates and visitors, possibly attracted by the all you can eat deals (+971 4 282 4750).

A word about brunch …

Friday brunch is a big thing in Dubai – the weekend starts on Friday – though it has spread to other days. Unlike Western brunches, the meals start at around noon and typically involve all you can eat (and drink) deals. Time Out Dubai’s 2012 Best Brunch Winner was Bubbalicious at the Westin Dubai Mina Seyahi, (+971 4 399 4141). It’s three restaurants, covering Asian, seafood and steaks. The all-inclusive prices range from AED350 with soft drinks to AED590 with “premium bubbly”.

Somewhat cheaper – and recommended by colleagues – is Double Decker, which is based on the theme of London Transport, spread over two floors. The menu tries to be Brit oriented, though it’s really international – Buffalo wings, burritos, calamari. A bit like London, really. AED190 for the Saturday barbecue from 15:00-19:00, including drinks.

The airport is very close to the city itself – 20 minutes in a taxi and not much longer by metro (which is an elevated railway).

All metered and plentiful. Many drivers are immigrant workers so don’t know where things are and don’t speak much English or Arabic, so it is a good plan to use the ranks by hotels where the hotel staff will be able to sort things out (and see off any rip-off merchants).

The metro has only two lines, so is very easy to use and cheap. The only problem is that it mostly runs along the same route as the main highway through town, the Sheikh Zayed Road. At best this is six lanes, and at worst it can be 12 lanes – so crossing it is a major undertaking. There are pedestrian walkways everywhere, but they can be long, and still leave you with a lengthy walk on the other side. With an average daytime temperature of 32.5°C (90°F) that can be an issue. The good news is that the Sibos venue, the Dubai World Trade Centre, is a short walk from the subway station.

There are buses. Apparently. The central bus station in Deira is located near the Dubai gold souk. The central bus station in Bur Dubai is near the large Plaza Cinema complex on Al Ghubaiba road. Unlike the Dubai airport bus service, the regular Dubai bus service does not operate on a 24 hour basis. The buses in Dubai start running at 06:00 and the last bus leaves at 23:00. The service is, however, unpredictable according to locals and timetables difficult to find. The Dubai public transport network is very cheap to use. Dubai bus tickets can be purchased from the bus station or from the bus driver and cost AED13 (€0.20-€0.61). Drivers will accept only the right amount of money, they do not give change.

The Burj Kahlifa is the world’s tallest building at 828 metres. There is an observation deck on the 124th floor, for which booking is recommended – preferably several days in advance. An immediate admission ticket costs AED400 compared to the pre-booked AED125. Immediate admission might mean a wait of several hours.

Billed as the world’s largest shopping centre, The Dubai Mall features pretty much every main brand from most major markets. If the shopping is not enough there’s a vast aquarium, an Olympic-sized ice rink, 22-screen cinema, the Sega Republic games arcade and a branch of upmarket UK supermarket Waitrose. Other retail opportunities abound at the Mall of the Emirates, which features an indoor ski slope with real snow, and the Dubai Marina Mall.

For a glimpse into what Dubai was like just a few decades ago, head to the other side of Dubai Creek and the Deira area, where you will find more traditional souks. The Gold Souk on Khalid Bin Waleed Road is the place to go if you have ambitions to emulate Mr T in the A-Team.  It is essentially a street where every shop window is filled with gold rings, chains, necklaces, earrings and a surprising number of other things. You’ll also find silver and platinum, plus diamonds, rubies, emeralds and suchlike.

One shop, Kanz Jewels, features what the Guinness Book of Records confirms as the largest gold ring in the world, weighing in at 63.85kg, of which 5kg is precious stones. Dubai claims to be the cheapest place in the world to buy gold, but even so the ring is worth around $3 million.

The nearby Spice Souk is not in the same league as the Grand Bazaar in Istanbul – or even the spice counter in your local supermarket, to be honest – but it has all the right smells and the possibility of colourful interactions with the persistent shopkeepers. The best saffron comes from Iran, by the way, though how the growers get paid while sanctions are in force is a mystery.

At Dubai Creek itself there are water taxis, providing a cheap way of getting on the water and watching as traditional dhows ply their trade.

As an interesting diversion from swimming with sharks at the conference centre, delegates can head to Dolphin Bay, on Crescent Road where Atlantis The Palm offers a “range of dolphin interactions” suitable for all ages and swimming abilities. You can stand in shallow water, swim or scuba dive. The dolphins are more or less tame, so the experience will be less chaotic than swimming with dolphins in the wild.

The Al Fahidi Fort is Dubai’s oldest building and home to the Dubai Museum, which gives a view of the development of Dubai from before the oil-fuelled building boom that started in the 1960s. It aims to show what traditional life was like before oil replaced pearl-diving as the local industry. It’s very cheap – AED3 – to get in.

The museum is in the Bastakiya Quarter, a historical part of town, where some of the traditional buildings still have wind towers that function as air-conditioning. The area is also home to myriad cafes and small restaurants, as well as art galleries.

Also in Bastakiya is the Sheikh Mohammed Centre for Cultural Understanding (www.cultures.ae). The centre invites visitors to join them for traditional Emerati breakfasts, lunches and dinners – the cultural brunch every Saturday costs AED95 per person. Advance booking is required.

There are also a range of heritage tours and visits to the Grand Jumeirah Mosque, which is the only mosque in Dubai open to the public and dedicated to receiving non-Muslim visitors. Public tours are available every day except Friday: arrive at about 09:45 for the 75 minute tour – and dress appropriately.