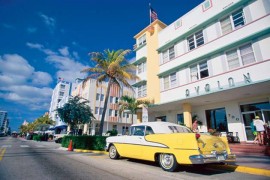 A new mobile payments network called YellowPepper has launched in Colombia, marking the beginning of a massive project to bank the unbanked and sweep away the dominance of cash across the Spanish-speaking Americas.

Created in 2004, Miami-based YellowPepper has now signed 12 Colombian banks to its system, which consists of a mobile payments card called Socia, developed by YellowPepper for Credibanco, one of the two payments processors in Colombia. The idea is that anyone with a mobile phone can now use it to make and receive payments throughout Colombia.

With a population of 46.9 million, Colombia has a mobile penetration rate of over 100%, according to the World Cellular Information Service. At the same time the unbanked portion of the population is around 35% of the adult population, according to estimates provided in March by the Colombian Banking Association. YellowPepper hopes to take advantage of these factors to boost financial inclusion in the country.

“Our vision of the future is to have all transactions taking place on the mobile phone – that is the future of payments here in Latin America,” said Serge Elkiner, chief executive and co-founder at YellowPepper. “If you’re selling vegetables in a Colombian market stall, we can turn your mobile phone into a POS device, so you can accept payment via mobile. It doesn’t have to be a smartphone either – we support Java phones as well as smartphones, because we know not everyone has a smartphone and we want to include everyone.”

Before starting up YellowPepper, Elkiner worked at Israeli HelloTech Technologies, where he designed and implemented the company’s mobile payments offering for vending machines. Now, he believes that a combination of a mobile app and mobile money transfer, including peer-to-peer, is the way forward. The company plans to launch in Mexico and Ecuador in the next few quarters, to be followed by Guatemala and a total of nine Latin American countries.

“In Latin America, mobile penetration is greater than internet penetration,” he said. “Part of the idea behind YellowPepper is that it is more practical to spread financial inclusion through a virtual card that exists on the mobile, than it is to post out plastic cards to places that may not even have a developed postal address system comparable to the UK or US. For the customer to make a payment using their mobile, they just need to either sign up for a Socia account, or if they already had a bank account, they can use that via the YellowPepper network to make the payment.”

One of the other intended benefits is the firm’s focus on helping smaller merchants to develop their own loyalty and promotion schemes – abilities that are normally only available to the larger ‘chain’ firms. The fact that a mobile inherently also acts as a communication device, potentially linking the seller and regular customers, can also be considered a bonus point. Meanwhile, according to Elkiner some 70% of Colombian ATMs are now also able to dispense cash to customers using a mobile phone, rather than a plastic card.

YellowPepper will launch first in Bogota

“We take longer to deploy than some other mobile payment firms out there, but we believe it is more than worth it,” said Elkiner. “For mobile payments to really work, we want to make it available everywhere, through every POS, and get all the financial players on board so that we become a real standard in the countries we enter. We haven’t just rushed in as we could have done – instead we are building something that will stand the test of time.”

The one Latin American market YellowPepper does not plan to enter is Brazil, where the country’s first ever mobile payments service was launched in May by Spanish and South American telecom firm Telefónica and MasterCard. Available first in Sao Paulo and Belo Horizonte, the Zuum service will allow Brazilians to transfer money, buy credits for pre-paid mobile phones and pay bills with their mobile phone.

The firm’s choice may have been a sensible one, since other mobile payment services are also expected in Brazil imminently. Zong, a PayPal subsidiary started in 2008 by entrepreneur David Marcus, is currently seeking to bring Brazilian carriers Vivo, TIM, BRT, Claro and Oi onboard for its own mobile payment service in the country. Meanwhile, eFinance company Paggo is developing payment solutions with mobile operator Oi and the national bank, Banco do Brasil.

Elsewhere in the world, mobile payments have made significant strides forward in recent months. In August, Azerbaijan card processing company AzeriCard has partnered with software firm OpenWay to create a mobile wallet that helps Azerbaijanis to withdraw cash from ATMs using a mobile phone and transfer money without using a bank card, while in France, French railway operator SNCF adopted a mobile payments system from Californian tech firm VeriFone Systems, which allows customers to pay for railway tickets using a mobile device.

In Africa, Telecoms firm Orange is planning to launch a set of mobile payment services in Botswana and other countries in Africa and the Middle East, which it says will easy access to funds around the clock and bring new point of sale, online and ATM transaction options to customers. Meanwhile, Western Union has launched a mobile money service in Nigeria, which it says will help boost financial inclusion and provide new methods of money transfer for people sending and receiving money to Africa.