Slovakia shapes up as centre of excellence for mobile payments 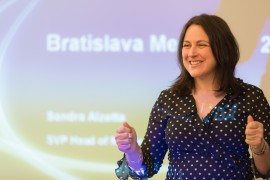 The on-going turf wars that have held back the adoption of using mobile phones as a payment device at the point-of-sale will soon be a thing of the past if the progress made in the Slovakian capital Bratislava over the past year is any indication.

Reeling off the numbers for contactless transactions in the country – 1 million contactless payments per month, 60% of issued cards contactless enabled, 36 % of the PoS terminals and 10% of all Visa transactions now using contactless – Alzetta says that this is just one of 40 projects that Visa expects to have running in Europe by the end of this year.

Oh, and by the way, Visa and Samsung are working on embedding the Visa application into the hardware of future handsets. Currently Visa has certified 40 NFC enabled handsets and expects this to reach 80 by the end of the year as the 40 pilots roll out.

Open partnerships are the way ahead after years of alliances and consortia forming an regrouping, it seems.

For Visa, the physical point of sale is a major focus – “it is our heartland, really” she said. Contactless has gone well, but it is really only a stepping stone on the road to Near Field Communication based around the mobile phone as a replacement for the contactless card. “Contactless is an important step to NFC – tapping is a part of consumer education,” said Alzetta.

By 2020, Visa Europe reckons that 50% of its transactions will originate with NFC enabled phones, largely replacing the contactless cards currently being carried by 60 million Europeans.

For now, there is still an element of chicken and egg in mobile adoption, though as Alzetta said, contactless adoption has been positive, said Lucia Sud’ová, head of the retail products division at Tatra Banka (left). Almost 100% of the cards issued by the bank are now contactless and adoption has been swift – “Slovakians like innovation and adapt very quickly,” she said. “We can now say that people trust the cards: after three years there have been no customers reporting fraud (and there is zero liability). Big fraudsters are not interested in the small limits of card on cards.” Tatra’s offline limit for contactless card payments made without a PIN is €60.

The bank’s first foray into mobile contactless was using a Wireless Dynamics-supplied NFC-enabled iPhone case branded as the iCarte in May 2012. “We are following the habits of our customers,” said Sud’ová. “They want everything to be on their mobile, and that includes banking and payments.”

The iCarte solution was always seen as a temporary approach – as Apple continues to leave NFC functionality out of the iPhone, the bank has recently started offering a version for the iPhone 5, also supplied from Wireless Dynamics. “The iCarte won’t last for ever, but it gave us the ability to provide instant card issuance and it wasn’t a big investment – it wasn’t small either but it was worth it: it is very hard to get a “wow” effect in retail banking and this got it,” said Sud’ová. “Innovations don’t always have a business case; sometimes you just have to have faith and invest because you believe that something is going to be a market leader. You have to invest for the future and not expect to make money from day one. Do we believe that consumers will pay by mobile in the future? Yes, so we have to fight for the share of wallet.”

At the beginning of this year, working with Telefónica/O2, the bank begun offering a “SIM-centric” solution, using NFC-enabled SIMs. These work in conjunction with the NFC aerials inside the handset, so current iPhones are not an option for this route.

The partners have worked together to develop an infrastructure that allows Tatra – and any future banking partner – to remotely manage the devices without having to go through Telefónica . Security of the customer’s data is taken care of on the bank side of the system.

Such an infrastructure is expensive to develop and maintain, which raises one of the other interesting things about the Slovakian pilot: its openness.

“It is not in our interest to be the only one doing it. We want all the banks and all the operators involved,” said Tomáš Masár, strategy & business development director at Telefónica Slovakia. “We have to co-operate and share the infrastructure with our competitors to make it as cheap as possible. We don’t want to end up with three infrastructures.”

This works all ways, said Sud’ová, who expects to announce a similar collaboration with one of the other Slovakian network operators before the end of the summer. She wouldn’t be drawn on which of the two – Orange or T-Mobile – it would be, but it’s rather academic as the point is to sign up both at some stage.

According to Masár, handset manufacturers are proving less co-operative. Currently five of the six handsets O2 supports for Tatra are made by Samsung – the sixth is a Sony device.

The proliferation of handset makers and handsets does create a complex set of problems, said Masár – every change of firmware has to be checked across every market to ensure that it isn’t going to interfere with the payment app and disable it in some way.

“As adoption rates go up, hopefully they’ll realise it’s themselves they are hurting,” he said.

As the adoption rate accelerates, Sud’ová says that new features and services will enable the bank to keep pulling ahead. Voice biometrics will soon be added to allow direct secure contact with the bank’s call centres, and the smartphone app will interface directly to online payments engines, driving more mobile-originated online purchasing.