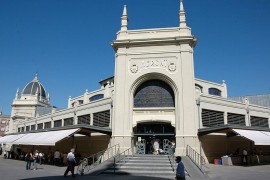 The service, called ‘Instant Money’, is free of charge and is designed to help in emergency situations where the customer, or a relative or friend, has no cash or card.

The system sends an SMS to the recipient, which contains a code that can be used to collect the money at one of the bank’s ATMs. Senders can send the funds from a computer or using the bank’s mobile app on their tablet or telephone.

NatWest launched a similar service in the UK last year, which was subsequently exploited by hackers that used phishing emails to extract the customer details and then download the app and steal customer funds. The NatWest ‘Get cash’ feature affected was temporarily withdrawn. However, it has since been reinstated.

Banco Sabadell is based in the city of Sabadell, in 12 miles northeast of Barcelona. Founded in 1881, the company is the fourth largest bank in Spain. A demonstration of the bank’s new cardless withdrawal service can be seen here.