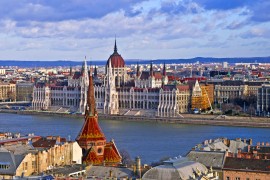 For the first three months of 2012, Misys was the subject of a protracted bidding war. The company’s falling revenues were exacerbated by this period of uncertainty, shaking  client confidence, said one banker at the Misys European Forum  in Budapest last week.

“[Misys] either needed to do something innovative or it would be dead in three years,” he said. “A few weeks ago I was of the latter opinion, but now I think it looks like they have done what they should have done.”

Before looking what Misys has achieved, it is important to understand where it has come from, writes Dan Barnes.

In 2011 a $2.27 billion (£1.47 billion) takeover by core banking technology provider Fidelity had fallen through. In February 2012 chief executive Mike Laurie left the firm when merger terms were agreed in a £918 million all-share deal with Temenos, another major rival in core banking platforms. However, that deal subsequently fell through. Tom Kilroy, interim chief executive , acknowledged in March 2012 that customers were delaying orders as a result of the ongoing uncertainty.

In the long term, the failure to successfully iron out a deal with a rival core platform provider may have been a saving grace for Misys, which like its rivals had yet to see a big Tier One bank take up a core system replacement. The core banking market has been suffering in the downturn; Temenos shares fell from CHF35 (£24.28) in January 2011 to a low point of CHF 15 (£10.40) in January 2012 and two years on have not yet broken back through the CHF25 (£17.34) barrier.

Private equity firm Vista Partners stepped into the breach, fending off a bid for Misys from private equity rivals CVC Partners with a £1.2 billion offer of its own in June 2012. It brought more than money to the table: in February 2012, Vista Partners had bought Thomson Reuters Trade and Risk Management, a capital markets technology firm, for an undisclosed sum. Rebranding it ‘Turaz’, the firm brought with it the Kondor+ derivatives trading and risk management system.

Misys had itself acquired risk management technology supplier Sophis in 2010 which brought numerous buy-side clients, adding to the user bases of its own Opics and Summit FT treasury and trading systems, alongside the Midas, Equation and Universal Banking core platforms.

As a consequence, when Vista Partners merged its two acquisitions, it created a systems provider with considerable breadth.

But breadth alone does not create a successful company.

Inevitably, the provision of separate technology platforms and private ownership draws a comparison with financial software provider SunGard, owned by private equity firm Silver Lake Partners. Where Misys differs is in the direction it has taken with its systems. Rather than operate its product teams on a ‘competitive’ basis, as it  perceives rival SunGard as doing, Misys has decided to integrate the systems and create an open-access architecture to integrate better with third party systems.

These innovations were announced in two parts: Misys BankFusion Digital Channels was launched in March year at the Misys Middle East North Africa  Forum, and Misys Capital Markets Fusion at the MEF this month. These are the integrated product sets that have caught the imagination of users.

The drive for the delivery of Misys Capital Markets Fusion had stemmed from the Kondor+ business unit which had been exploring systems integration since 2011 explains Juerg Heidtmann, global head of integration and innovation at Misys.

“We thought it would be a good idea to break down what the system is doing into components, and implementing them in a generic way so they could easily be replaced and extended without going through the release upgrades, and to be open to external systems,” he says.

The firm had realised that its release cycles were too long; clients had to upgrade an entire system even if they only needed to upgrade one component. They also often wanted to use some of their existing systems.

“We redeveloped what we had on this new architecture. The systems had been designed at the end of the 1990s on client server architecture and this would not be suitable for clients in a couple of years’ time. Given the increased volume of trades that will have to be processed with predominantly algorithmic execution, a client server simply architecture wouldn’t hold up,” said Heidtmann.

The Kondor+ team kept this idea and after the merger with Misys spent the first six months examining how the new systems worked and then extended the model to all of the other products. The new service-oriented architecture uses in-memory processing and is distributed across compute nodes in order to make compute power scalable.

This Misys Application Fabric offers integration between systems but also allows users to take the best elements of the different Misys platforms and use them as standalone options.

One of the European bankers attending MEF expressed optimism on seeing the launch of the new Fusion product: We have Kondor+ at the moment and in the next year we will be starting a Kondor+ and Summit upgrade,” he said. “This looks good to us. It remains to be seen how it works but if it works it should make things easier.”

Misys is making a point of emphasising continuity of product and brand. The only change that clients at the event highlighted was in the delivery of customer service; with the majority saying that  it had improved. (One or two Sophis users said it was less personal, but emphasised that did not make it worse.)

The amount of change internally has been significant. Of the 10-person management team, five are from the Thomson Reuters/Turaz business. Only two are from Misys; former chief operations officer and recently-appointed chief executive Nadeem Syed had joined Misys in 2012 from SumTotal. Global head of engineering Robin Crewe joined in 2010. Grace Van Til, Misys’s recently appointed head of customer support, was previously Syed’s troubleshooter in the same role at SumTotal.

Chief financial officer Himanshu Raja and chief operating officer Amanda Mesler, who both joined Misys this year, were both part of the executive committee at Logica that successfully sold the company on to Canadian vendor CGI in 2012.

A Misys spokesman would not give an exact figure regarding the number of job losses following the merger but said, “We have had very little attrition and have been able to focus efforts in building and strengthening the customer-facing teams.”

Misys is clearly not the company it was a year ago: the firm has endured some painful change, but it has at least been quick. It has also produced what promise to be tangible benefits for users. The year ahead will allow banks running Misys platforms to cast their judgement on how successful its efforts have been.