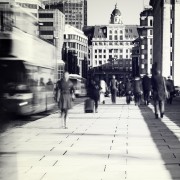 The number of new financial services jobs available in London during May was 20% over the previous month and recruitment specialists say that the trend is upwards, but the number of new jobs in May was 59% down compared to the same period last year.

Morgan McKinley’s London Employment Monitor in May 2013 registered a month-on-month increase in the number of available permanent and temporary jobs coming onto the City job market, rising by 20% from 5,355 to 6,426.

“An increase of 20% in new job availability is certainly a good sign, indicating cautious confidence from hiring managers across the City in growth potential for their business areas,” said Hakan Enver, operations director, Morgan McKinley Financial Services. “Much of this is on the temporary and contract side of the recruitment market, which was also the case twelve months previously.”

Enver pointed to a recent REC/KPMG May 2013 Report on Jobs that noted a trend for increased hiring in recent months, saying that this matched Morgan McKinley’s hiring data. “As we approach the mid-year point, we have seen less volatility both in the financial markets and also in the wider global economy,” he said. “Although the market remains highly sensitive to macroeconomic issues, sentiment has slowly been improving since the start of the year.  With many institutions now working more efficiently following major cost drives, and with them investing in areas they deem more

profitable, the positive announcements made in Q1 has encouraged further hiring to support additional trading activity. This is on top of continued plans to bolster their change and governance related functions.”

This is translating into a more relaxed job market, he said. “From recent conversations with job seekers, there is definitely a feeling that job insecurity is less of a concern; individuals are more comfortable with the idea of looking around. In addition, people who took up new roles in 2010, when the City experienced a partial recovery at that time, will now be particularly interested in seeking out new, challenging opportunities. For many ambitious professionals, the 2-3 year cycle of moving jobs is typical, so we anticipate increased interest from job seekers as they show some restlessness with their current jobs.”

The average salary for those securing new jobs in May 2013 again increased with an 8% rise. This compares to an increase of 12% in both April 2013 and May 12. “The average level of pay that professionals can expect to receive on joining a new company has fluctuated since the start of the year, without returning to the same high level seen in January. The start of Q1 is always a time when employers are on the lookout for talent and they have new recruitment budgets with which to secure the best people,” said Enver. “With the increased confidence in the market from April 2013 to May 2013 and with more job seekers becoming available, it’s likely that hiring managers now feel less pressure to offer very substantial remuneration packages to attract individuals. The 8% average change in salary for May 2013 was slightly distorted by a number of candidates being placed into positions having recent redundancies. There was a noticeable trend of new employers matching the last salary or even offering less than what the candidate was earning previously, thus pushing down the average rate. However, we do not expect this trend to continue moving forward.”