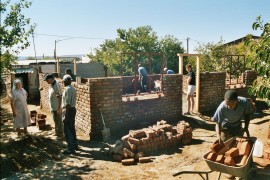 South Africa currently has a population of 50.6 million, according to the World Bank, yet it boasts 67.9 million mobile phone subscriptions, according to data from Informa Telecoms & Media’s World Cellular Information Service. In South Africa, an estimated 22 million people earn less than 3,000 rand a month. Of these, 66% do not have bank accounts.

The Standard Bank mobile service consists of an AccessAccount, which is a banking account based on a mobile platform built by German software company SAP.  That platform includes both SAP and third-party back-end systems, the purpose of which is to allow users to create mobile apps. With the app, sales agents can open an account for new customers within minutes – an ability that Standard Bank hopes will gain it new customers in areas that have traditionally been underserved, such as townships and rural areas.

The mobile app allows users to make transfers from person to person and purchase electricity and airtime. In addition, they can get cash from Standard Bank’s network of access points, which operate through partnerships with retailers, avoiding the need for the customer to travel to an actual bank branch. The new AccessAccount currently has 550,000 users, according to Standard Bank.

“This is a very exciting time for us at Standard Bank. We have built an entirely new IT system and platform that spans across all the bank’s offerings in our ‘Inclusive Banking’ business,” said Peter Wharton Hood, deputy chief executive, Standard Bank Group. “Mobile origination is not only far more accessible for customers, it is also 80% cheaper. Standard Bank is one of the first major banks in the world to run SAP Mobile Platform. This tremendous competitive advantage has significantly helped us grow our customer base. We are currently opening up to 7,000 new accounts a day via SMS technology, in less than six minutes per transaction. This incredible outcome far exceeded our expectations.”

Mobile payments have already achieved considerable traction in other emerging markets of Africa such as Kenya, where m-Pesa has 18 million users. Mobile payment services are also spreading to other parts of the world; earlier this month, Brazil gained its first mobile payments service, through a partnership between Telefonica and MasterCard.