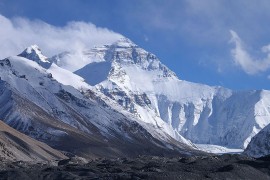 News that two Argentine climbers are planning mobile banking exploits on the slopes of the world’s tallest mountain, Mount Everest in the Himalayas, reveals the lengths (Surely ‘heights’? – Ed.) to which banks will go to gain publicity for mobile payments technology.

Climbers Horacio Galanti and Horacio Cunietti from Argentina will attempt to carry out mobile banking transactions using Breeze, a mobile banking app developed by Standard Chartered. They will do this as they attempt to reach the summit, which stands 8,848 metres above sea level.

Standard Chartered’s aim is to commemorate the first successful ascent of Everest by Edmund Hilary and Tenzing Norgay on 29 May 1953. More practically, it is also meant to highlight the potential of the app itself, which was made to help users transfer funds, pay bills and manage their money. It includes a calendar that can help monitor transactions, a wish list that can be used to make plans, and the ability to top up your mobile phone and book movie and airline tickets.

The two Horacios’ own objective is to help preserve the natural appeal and environment of Everest by helping to clear up some of the used oxygen tanks, food tins, climbing equipment and other detritus left behind by previous expeditions.

“This expedition will see two remarkable individuals do extraordinary things through their efforts to improve the environment on Mount Everest and also harness the power of mobile technology to prove that banking can be a Breeze even on the highest mountain on earth,” said Ashley Veasey, chief information officer for Standard Chartered in Hong Kong.

This is not the first time an outlandish exploit has been linked to mobile banking technology. Former Goldman Sachs banker Anton Kreil is due to transact the world’s first trade from space next year – including a currency trade and a stock trade, apparently. Kreil will make use of the new Lynx XCOR MKII space shuttle, courtesy of private venture Space Expedition Corporation.